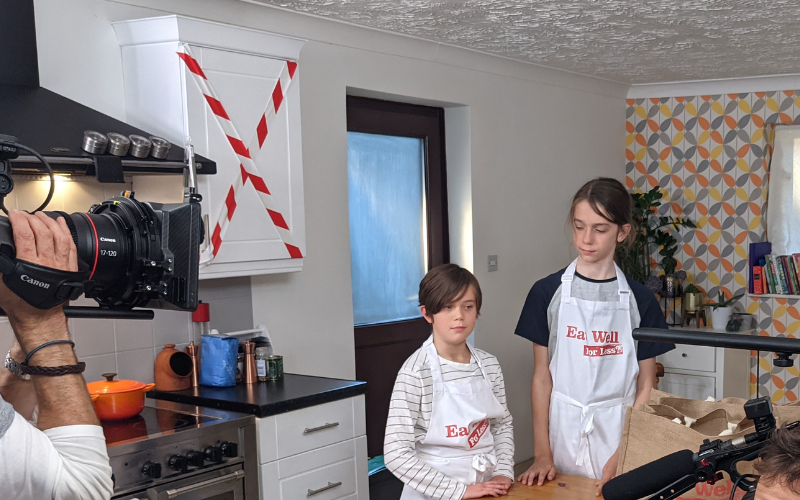 takeaways from being a featured family on Eat Well For Less

Eat Well For Less is a programme that airs on prime-time BBC 1, starring Chris Bavin and Jordan Banjo. A notification in our daughter’s school newsletter mentioned the programme was looking for new families to star in episodes for 2022, families looking for help with eating and cooking challenges. Guess who applied and got in?! By Richard Forsyth

Helen, my wife and long-suffering putter-upper of me, is good at surprises, but this was a new level of daring. After a second or two of sheer panic, I smile back and say, “OK, let’s do it, what can possibly go wrong?”

Such life-altering surprises in weaker bondings could probably trigger an NDE (Near Divorce Experience) but in truth, we are always cooking up random adventures. The truth is, we could do with a little advice, our eating habits were all over the place and our ‘hit and run’ style shopping grabs were costing too much as well as feeling like pure chaos.

being afraid and doing it anyway

It felt extreme, because, ‘real life’ family voyeurism-style TV can be a minefield. There is a real chance, or even promise that there will be exposure of all the imperfections you want to keep within your four walls and private. To compound this, we are in the era of armchair judges with broadcast entertainment, we love to look into a household and gasp at what other idiots are doing wrong. Social media comments can be brutal. Although Eat Well For Less wasn’t our first media rodeo it was the first one that we invited into our home with our children and our lifestyles, so we braced ourselves.

The reasons behind applying were in truth manyfold, not just for food advice. We have a small business, we learnt a lesson before, that exposure to millions of people, even in non-associated stories, can lead to an interest in what you are doing professionally, it’s a numbers game with the audience, and a cornerstone of PR is to reach the masses. We may have smuggled branded mugs, books, stickers and more into each shot. It will be interesting to see if they make the cut or get blurred out!

That said, we do have genuine stress moments with meals and food choices. As a family, we comprise of a vegan (Helen), a meat-eater (me) and two vegetarians (the kids), with issues like unhealthy snacking and picky eating. Roll that up with cooking whilst working from home and there’s plenty of family meal-related stress to dissect for the celebrity food experts. What we didn’t count on with the filming, was how emotional the journey would be and that it would genuinely have an impact on our lives and our habits.

the art of storytelling for film

Filming is a mix of fun and tough with pressure to be available for long days, multiple takes on every clip and succumbing to the story-telling direction around your life. Neighbours who saw it unravel in the local area have asked us, ‘is it genuine or set up?’ So, here’s the big reveal.

Firstly, we tell the TV people the issues we have, so those issues are real. The job for them is to craft this into a story. Sometimes the story is unwoven in a way like a portrayal of those issues, it’s not exactly a ‘fly on the wall’ documentary, and how could it be without the camera crew actually living with us. Although it did feel like that at times! Therefore, when we mentioned guilty pleasures, like eating crisps and peanut butter for snacks we found ourselves being filmed engorging on them in an exaggerated way for set-up scenes. In one take, I was almost sick from eating crisps and cake, it wasn’t I would say how I behave ‘exactly’ on my own. It illustrated an element of the story like a comic book recreation of real life. There was also an element of acting, and that was fun. It’s hard not to stare at the camera! The crew were brilliant, which really helped. You really see how much work they put into each of these episodes and in getting your story to unfold.

counselling in front of the whole country

In the interviews, which each member of the family had, the interview process was long and also quite personal. When the director interviewed my son in the lounge, Helen was with him, I was sitting on the stairs in the hall, behind the closed door but I could still hear the questioning. A few of the questions broke my heart a little in honesty, with someone I had only just met asking probing questions to my son about me as a dad, my eating habits, and of course his diet. I sat there feeling emotionally cold and that was a time when I wanted to stop the whole process. That was probably the worst of it and Helen had a similar reaction to some of the questions. It felt like counselling around your bad habits but in front of four million people.

Another interesting aspect of filming was that it’s natural to give longer explanations on camera in interviews. When you give an answer to a question by the director, they wait till you finish and then ask for a more succinct and punchier line, saying the same thing, so you end up with a nugget of a line rather than a speech. It’s editing that’s necessary, but it also can feel like it wasn’t what you said exactly compared to your initial answer when you are on your fourth go at rewording it.

When I mentioned I was worried about how the programme might portray us I was told ‘we want the public to ultimately love you, that’s the idea’. That was reassuring and there was a point in the stress of it all that we decided to relax, have a laugh with it and to be damned with any worries. I was painfully aware of some of the sillier things I did on camera but there is no going back once you’ve committed and you are always being encouraged to do something interesting, to relax into it, rather than just say, ‘this food is nice, that food is horrible.’

It helped that Jordan Banjo and Chris Bavin were real gents and interacted so well with the kids in shared scenes. Jordan Banjo in particular was excellent at putting the kids at ease when cooking for the camera. That was a big relief. The crew were sensitive to any feeling of intrusion and very amiable. They did also re-film a scene we said was not accurate, to their credit.

It’s also worth pointing out that we had some real belly laughs in the filming, to the point we were all crying with laughter. I did not expect that, but Chris and Jordan are larger-than-life characters and immense fun with or without a camera on them. We made some great grub too! 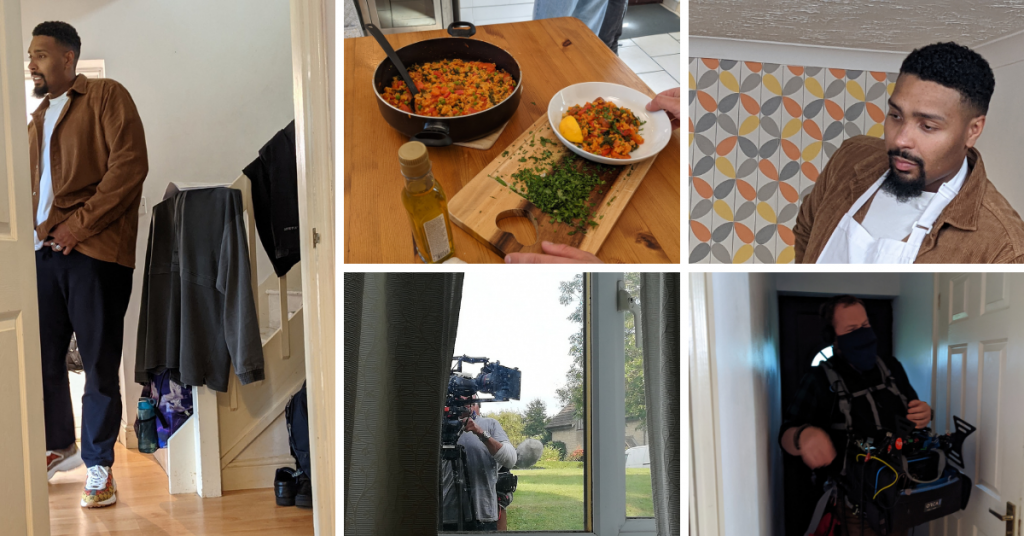 What we have gleaned from being on the show are these (forgive the pun) ‘takeaways’:

1. doing something is the best way to learn it

We had a real education in filming and media that could not be taught in any classroom or lecture. The kids especially can take this as a valuable insight into the world behind and in front of the camera. I would recommend that for anyone who wants knowledge in anything, do it, rather than read or hear about it. Immersive is better than anecdotal. My son wants to be a YouTuber. He now has a clearer view of what that can entail. When it came to cooking, this applies too. We made meals which pulled us back into our family cooking and eating together. You have to do it, rather than talk about it, obviously.

It takes someone external to show you what is wrong, to then point you in the right direction. We should know this from our own business work for our clients, but when you are in a problem you cannot always see the woods for the trees. We now have meal planners, plan shopping and save lots of money – whilst also enjoying time eating as a family, something we didn’t do so much prior to filming.

3. no one wants your whole life story – keep it short

A rule we know from branding is slogans, one-liners, getting to the point of it – this is what people expect and how they will engage. We all know this from two years of repeated campaigns around Covid like: ‘Stay at Home, Protect the NHS, Save Lives,’ ‘Hands, Face and Space’ and ‘Get Boosted Now’. We don’t invest time in working things out slowly. Get to the crux of it quick with messaging. Five words might be all you need if they are the right ones. For example, my son, Ed said something like this in the filmed interview about me: ‘Dad sometimes enjoys a packet of crisps in the kitchen, he’s not doing it all the time but he does eat packets of crisps now and again’, which two iterations later turned into, ‘Dad eats all the crisps!’.

4. saying ‘yes’ to things and taking risks can transform your life

We could have easily ‘bottled it’ and walked away from this but it was an opportunity, an adventure, risk and ultimately something unique we did together that we will never forget. You don’t always remember every little thing in life but this is something we will always have and if nothing else, it’s a great story to dine on!

If you want to work with Find Marketing, whose owners are now eating well thanks very much, please drop us a line, we’d love to hear your problems so maybe we can help you!